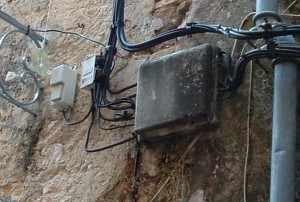 My eye was caught by a point of reflected light, which must have been the intentional. In the medieval village of St. Paul de Vence someone had suspended a compact disc from the eaves of a roof by a long string.


When I looked at the area I saw a well worked, well worn and well weathered facade of a building on which there were drain pipes, windows and shutters, wrought iron work, junction boxes and cables. Modernité s’impose: the modern world imposes itself, no matter what. I took the photograph to be the basis of a painting. I imagined it being in oils on canvas. I may implement that project. It would be a challenge. 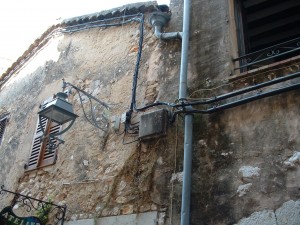 Wall with pipes and wires