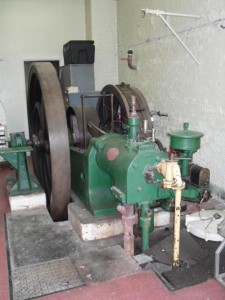 Currently, the majority of my colleagues in the Department of Mechanical Engineering would seem not to be in favour of removing an historic Crossley gas engine from the thermodynamics laboratory. A proposal to the effect of leaving it where it is, while making some major changes to the layout of the laboratory, is being drawn-up.

I like that engine. I admire and I value it. However, I find it hard to justify its continuing presence in the thermodynamics laboratory. It has probably not been run for thirty-five years, or, if it has been, it would have been run for only very few hours in that period and for the benefit of very few students. I know for certain that it has not been run since I joined the institute seven years ago. It no longer has the necessary connections to gas and water, so it would now take some effort to get it running again.

Some of my colleagues believe the engine will serve as a showpiece in the, perhaps, not-too-distant future when the institute moves to a new campus. It has been suggested that it could form a center-piece in a new building.

My own enthusiasm for the engine falls a lot short of that. I acknowledge that it is an important historical engine. It is in excellent condition and I feel sure that not many of these were built for laboratory use, complete with a water-cooled friction brake and a mechanical device to produce indicator diagrams (plots of cylinder pressure versus volume). It is a true masterpiece of bad engineering.

Yes, I did say masterpiece. The open mechanism on the top of the engine for lubricating the cylinder, one drop at a time, is a marvel. The sheer solidity and massiveness of the engine is impressive. The craftsmanship and attention to detail are excellent. It was not bad engineering in its day: it was leading-edge technology then. The cruel, harsh reality is that if this engine were to be used today it would be bad engineering. The power-to-weight ratio is very low and the efficiency is poor.

The engine is worthy of study and is deserving of a good and suitable home where it would be cared for with a view to indefinite preservation. I just don’t see a place for it in a modern thermodynamics laboratory.

As for a suitable engineering showpiece, some of the biggest recent achievements are small low-cost objects such as coronary stents or mobile phones. Perhaps one or two such monuments could be displayed in the thermodynamics laboratory, on a window-sill, without taking up valuable floor space.