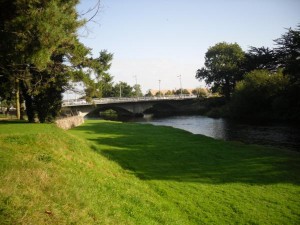 ‘Suds on the beautiful River Liffey and a dog’ is a 39-second-long movie on YouTube with a wonderful actor in the starring role that highlights, presumably mild, pollution consisting of suds on the River Liffey at Newbridge, Co. Kildare, Ireland. River pollution is an engineering issue that can and should be addressed. The technical failure to resolve the problem over an extended period of time points to a failure of regulation. This video was shot on 12th September 2010 from the bridge over the Liffey at Newbridge, which is shown in the photo above. The pollution was mentioned by Jim McGovern at an international conference on sustainable energy and environmental protection in August 2009 (see http://arrow.dit.ie/engschmecoth/8/). The dog in the starring role swam unexpectedly into the movie frame and transformed a dull technical exhibit into something rather more appealing.