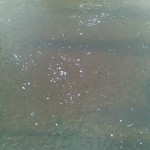 Suds on the River Liffey

I had been thinking about how one might take a sample of suds floating on the surface of a river. The photo to the left shows suds on the Liffey at Newbridge, Co. Kildare, Ireland. It was taken on my mobile phone from the upstream side of the bridge at Newbridge, looking down on the water. The water level and the rate of flow on the river were quite low at the time: 16:53 24 September 2010.

With a small container on a string it would be easy to take a grab sample of the water. However, I felt there was a possibility the water itself was very pure and that the suds floating on top were of entirely different composition.

Yesterday I saw a a fly fisherman wearing waders in the river a short distance upstream from the bridge in Newbridge and at another time I saw a swan swimming there. They were both surrounded by these suds. I do not know whether or not the suds disturbed them. I just imagine that they did, because they did disturb me.

By dropping a floating ring boom onto the water it would be possible to trap a sample of the suds. I tried out the concept on 25 September 2010. I used a plastic hula hoop that had an outside diameter of 755 mm and a tube diameter of 19 mm. It turned out to have an average density that was about right, as about half of the tube was immersed when it floated on water. I needed a strong and light line to attach to it and one of the lines from my delta kite fitted the bill.

I choose a spot on a low, grass river bank a few hundred metres upstream from the bridge. The suds were visible some distance out from the bank. Having unwound a sufficient length of line and secured the line winder I dropped the line neatly in a pile on the ground with the end attached to the hoop on top. I was then able to throw the hoop out to the area where the suds were flowing. The hoop landed on the water with a splash, which would have disturbed the suds—this could be an issue if the purpose were to use the sample to determine the area density of suds on the surface. I found that by pulling the hoop in slowly it was possible to draw the sample towards the river bank. Pulling the hoop too fast would cause it to partially submerge. The process of bringing the hoop to the river bank was thus necessarily slow. I noticed that these particular suds diminished in quantity with time. They had a lifetime of less than five minutes. Such suds that last for minutes cannot be produced by agitation of pure clean water. The natural surface tension of water is sufficiently high to collapse bubbles very rapidly indeed. After carrying out the exercise I washed my hands well. From handling the hoop and the kite line I had the impression that there was some sort of detergent present. It did not have the soft feel of ordinary soap, but seemed to have a hard slippey feel.

When I say that the suds diminished with time, I’m not sure exactly where they vanished to. Presumably the individual bubbles burst, leaving any chemical dissolved in the water, perhaps still at, or very close to, the natural surface tension skin of the water. I do not know whether the bubbles had been produced by agitation of the river water that contained some chemical that reduced its surface tension sufficiently that bubbles could form, or whether the suds floated onto the river from some surface water outlet nearby. In this field I am a pure amateur, but I’m quite sure the experts have all the answers.

As well as carrying out the sampling exercise I took photographs and video with my compact camers. I assembled a video clip and uploaded it to YouTube. It can be viewed in the frame below.