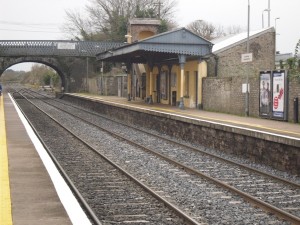 The railway station in Newbridge is beautiful and quaint, persisting from another time. I appreciate beauty and form and function. However, I am an engineer of today, who is keen to address the needs of today’s society. I believe it is right and proper to dismantle (let me be blunt, destroy) beauty that has outlived its era. Let’s log it, digitize it or store samples of it in heritage parks or museums. The Earth is not big enough to leave our former built environment in place as we continue our development.


I need to digress momentarily. In my view, the beautiful stone bridge in the photograph is highly dangerous for the citizens of Newbridge who use it as a road. Newbridge has expanded greatly in recent years and that small narrow bridge without footpaths now links large housing estates to the town and schools of Newbridge. Children and parents with babies walk over the bridge in great numbers and are in danger from the two-way traffic. 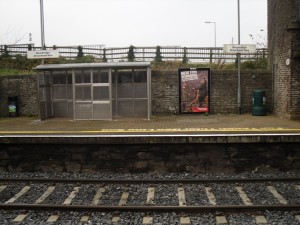 The photo above shows two bins hiding from rubbish and a shelter hiding from passengers. I imagine the bins hardly ever need emptying. Let me explain about the shelter.

Although the number of rail commuters between Newbridge and Dublin is smaller now than it was in the recent boom times, Newbridge continues to be a busy commuter station. The platforms have been greatly lengthened to accommodate long trains. A few years ago, vocal commuters requested Irish Rail to provide shelter on the main line platform for Dublin, as the original canopy was inadequate. It obliged by providing the small shelter between the two bins. This shelter is behind where even the longest trains for Dublin stop. On the other side of the original canopy there is perhaps 200 m (I haven’t measured it) of long platform. Generally now, trains stop with the last carriage directly at the original canopy of the station, but with the front of the train very far down the platform. Beyond the canopy there is no shelter and there is a metal paling that hardly breaks the wind. The relatively new small shelter at the rear end of the platform is redundant. Ther is no particular incentive for anybody to use it. 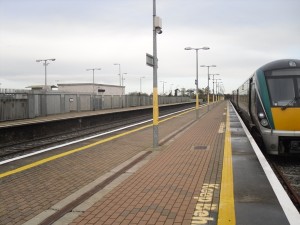 Irish Rail has partially modernised Newbridge station to adapt it to today’s needs. Resources are limited now and were limited even in the boom times. I would question the way in which resources have been deployed. A station such as Newbridge should have an electronic display indicating the times of departure, platforms and destinations for the next few trains (given there are now three platforms). Electronic displays have been installed in some other stations that are not as busy as Newbridge, although they are not necessarily functioning. However, safety issues should have the highest priority and, in my view, the provision of shelter on platform 2 for Dublin at Newbridge station comes under that category. My reasoning is set out below.

When, occasionally, the weather is wet and windy at a busy time in the morning, many passengers crowd under the quaint canopy. As the train arrives they start to move down the long platform in order to board the train. In these conditions, having the mass of passengers moving together as the train approaches the platform is not a good idea. Furthermore, it can happen that a train has to pass through without stopping at the station and if there is a crowd tightly packed under the canopy this is not ideal.

With regard to the deployment of resources, I would like to cite an engineering monstrosity that has recently been build at Clondalkin station to meet Irish Rail’s obligation to address the special mobility needs of passengers. As can be seen in the photo below, it occupies a large plot of real estate. It incorporates lighting that is on continuously over extended periods. A wheelchair user would need to be fit, patient and determined to negotiate the long ramps. The same would be true of anybody who finds it difficult to negotiate steps or a parent pushing a child’s buggy. Long inclined ramps such as those within the structure can be dangerous. If anything were to roll down the ramp it could build up high momentum. As a mechanical engineer, I do not satisfactorily understand why this was built. The engineering requirement can be met much more cheaply, effectively, safely and simply by a lift. For the design and construction of the Clondalkin access structure I would award Irish Rail a wooden spoon. 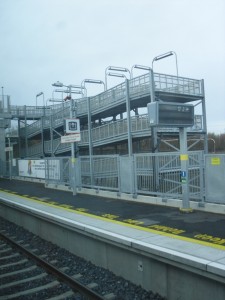 Irish Rail needs to improve its quality standards and listen to its customers. It is trying. Last Wednesday (as far as I can recall) it held one of its ‘Meet the Managers’ sessions at Heuston station. I had ten minutes to spare before my train and I made full use of it. I had the attentive ear of two friendly managers. As I told them, my experiences of raising issues with Irish Rail and having them addressed have often been ones of disappointment, but, I admit, there have been positive developments and improvements.